Outdoor Mosquito Repellents Everyone Should Have!

Isn’t life grand, you sit out on your wonderful porch on a lazy summers eve, listening to the crickets and watching the sun go down. You might want to wear shorts too, but that comes with a price because you suddenly hit that pesky biting insect, or mosquito and then have a few days of irritating scratching, accompanied by a lot of cussing at 4am when you need to apply some more calamine soothing lotion.

OK, so you’re not on a porch at sundown, you are preparing a BBQ for some guests in the backyard, and you didn’t invite those pesky critters. Bottom line is you just want to be sure you don’t get bitten. There are so many ways to assure this, but none work by themselves, there is always a comprehensive solution.

You ask, which is the best mosquito killer? Well I will let you know there are a few “best” and here is a list if the ten bests on the market today. Lest take a look at them and afterward, get to understand what is a mosquito trap. 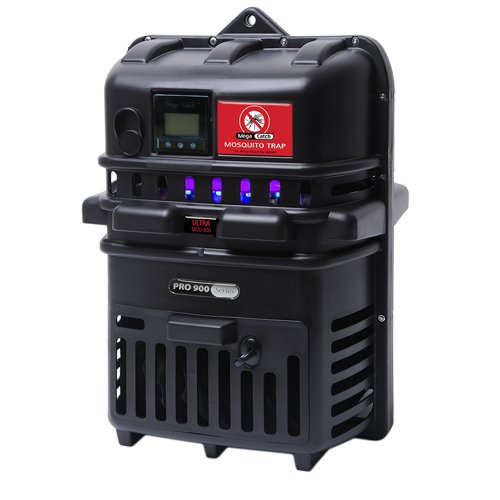 Top-of-the-line Mega-Catch™ Ultra Mosquito Traps is one of the best mosquito traps on the market, and it is engineered to successfully mimic sensory signals attracting mosquitoes and other biting insects from a distance of 150 feet. The Pro 900 integrates a proprietor Mosquito-Attracting-Stimuli (MAS) setting with thousands of options. You can fine tune this device to target specific mosquito species.

This Mega-Catch™ Mosquito Traps can be used without CO2, but this system has an integrated patented Variable Quantity Slow CO2 Gas Release System that improves capture rates. It replicates a key human/animal respiration feature via the release of variable amounts of CO2 into an air plume. This will increase your success rate by 300% to 400%.

The device comes with a self-serviceable on-board diagnostic checking system, a mesh catch bag or liquid catch container and will work with or without attractants. The power is a 12V source, and the casing is designed for all weather conditions. 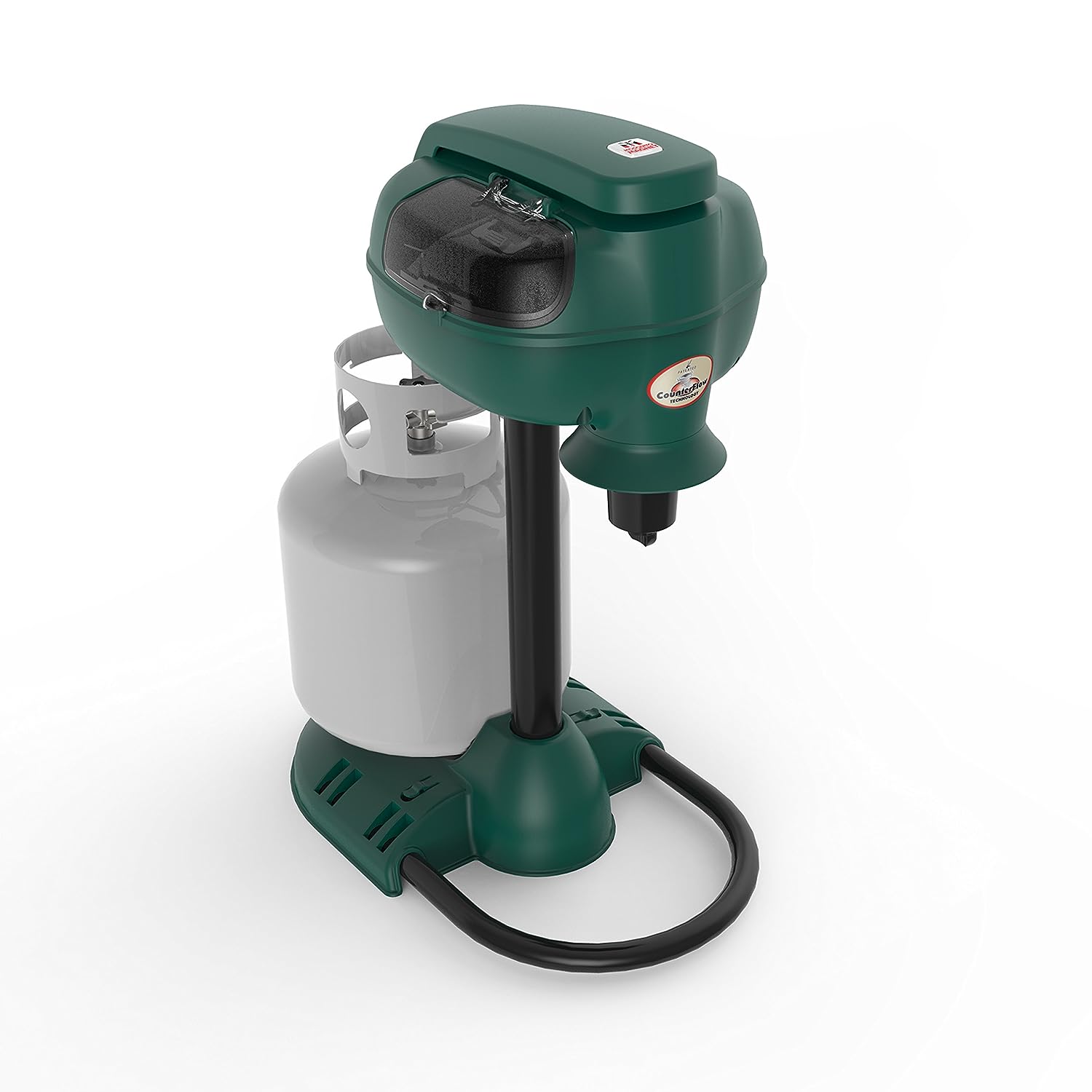 The Mosquito Magnet Patriot Plus uses CO2 to trap mosquitos and all the biting insects. It integrates the use of attractants and works in combination with moisture, heat, CO2 and special scents. The insects are lured into the trap and die from dehydration.

The Mosquito Magnet Patriot Plus is backed by 15 patents, which are the product of over a decade of intense research and fieldwork. These traps trap cover an area of 1 acre, and they need a propane tank to work. They come with attractant packs and nets. 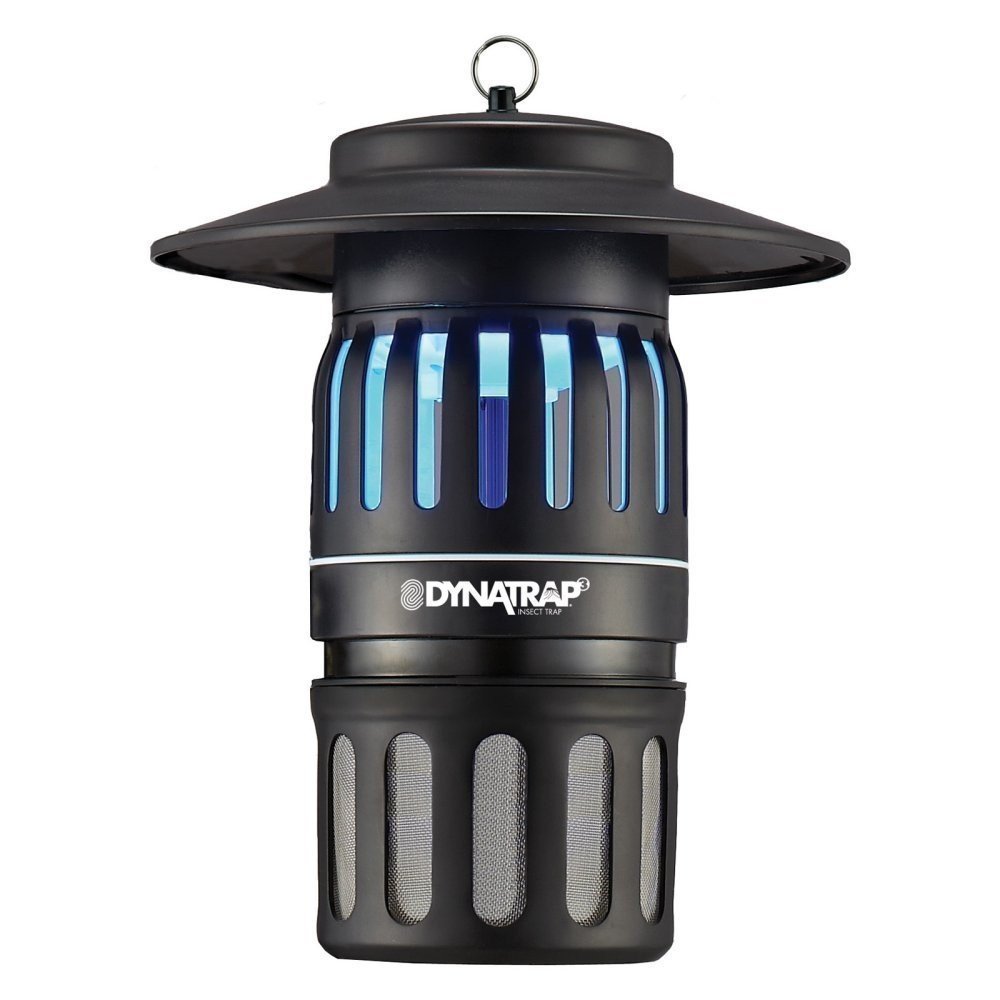 This is a non-zapping system, and you do not need propane. This model comes with a 10 ft. cord for a 110V power connection and weighs 2.81 lbs. 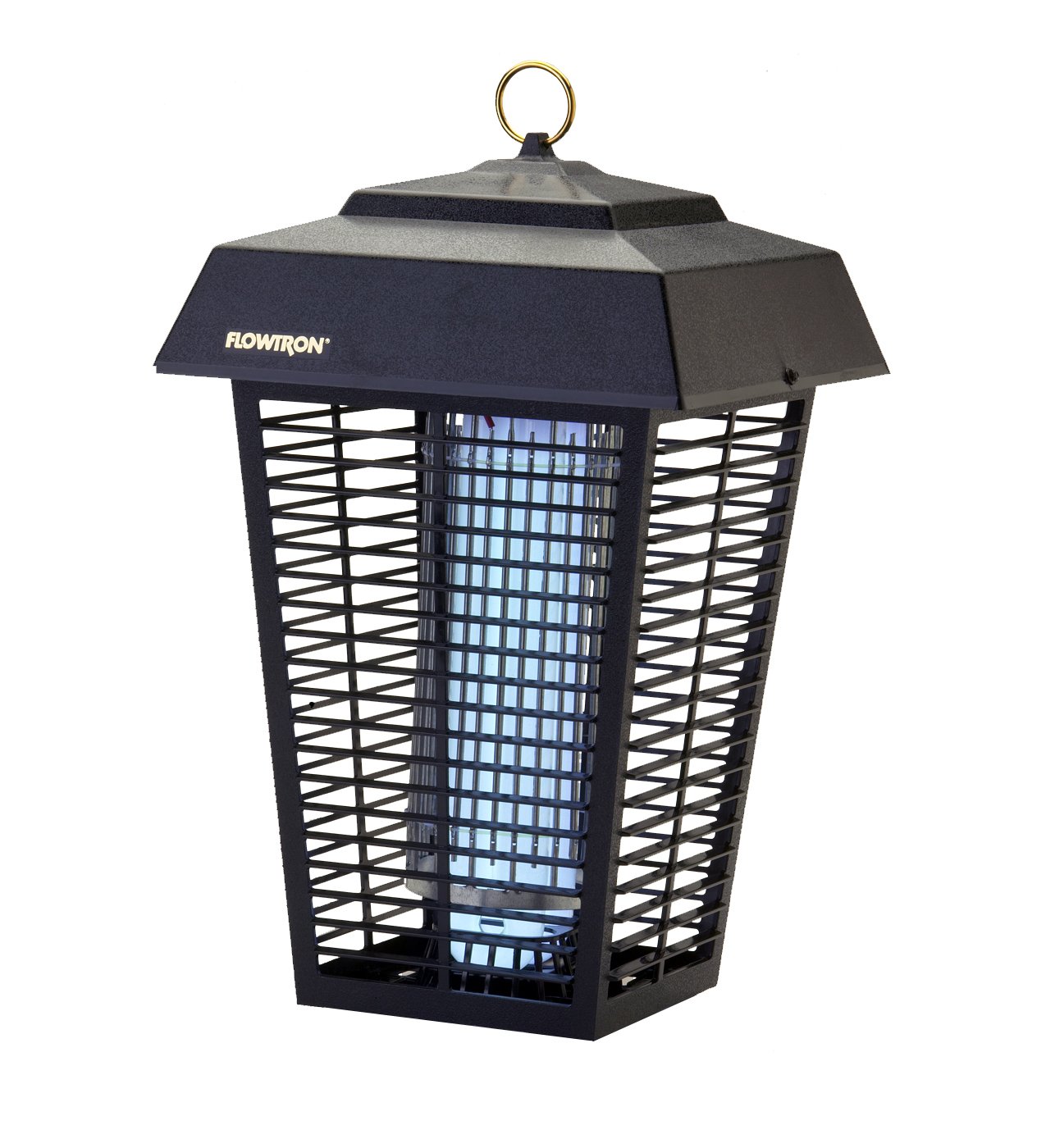 The Flowtron BK-80D is a member of the Flowtron family and is another leading brand that is recognized as being extremely efficient, effective and a low maintenance device that is environmentally friendly.

This model uses two 40-watt, “U” shaped, high-intensity, ultraviolet light bulbs (BF-150) that attract the insects towards a patented, non-clogging killing grid that “zaps” the insects leaving a dry remain and dust that can be returned to the environment.

You can add an attractant for extra efficiency, but this is not necessary. This is a UL and CSA listed device and weighs 9 Lbs. 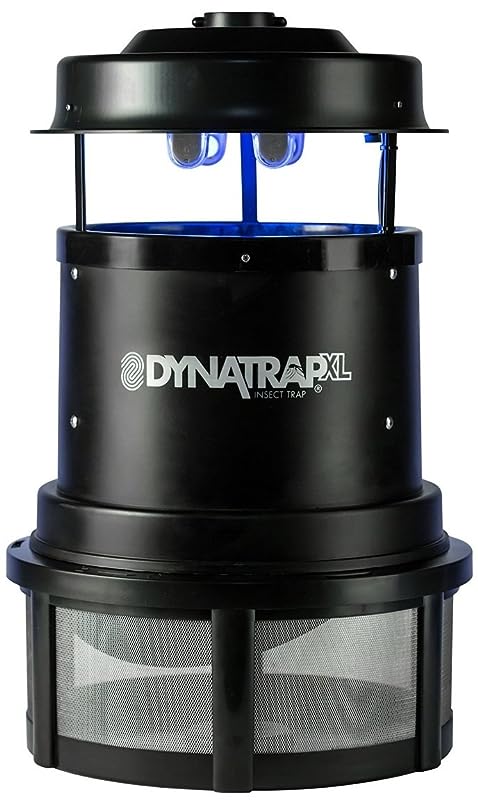 The Dynatrap model #DT2000XLP is a large insect trap that is designed to cover a 1-acre area. This model is much larger than the DT1050 and operates in exactly the same way. The main difference is the size, and this model uses a 35W UV fluorescent bulb that lasts for 3,000 hours, a proprietary CO2 producing Ti02 titanium dioxide-coated surface, and a quiet vacuum fan that sucks the insects into the devices trap.

As with the DT1050, this is a non-zapping system, and you do not need propane. This model comes with a 7 ft. cord for a 110V power connection and weighs 7 lbs. 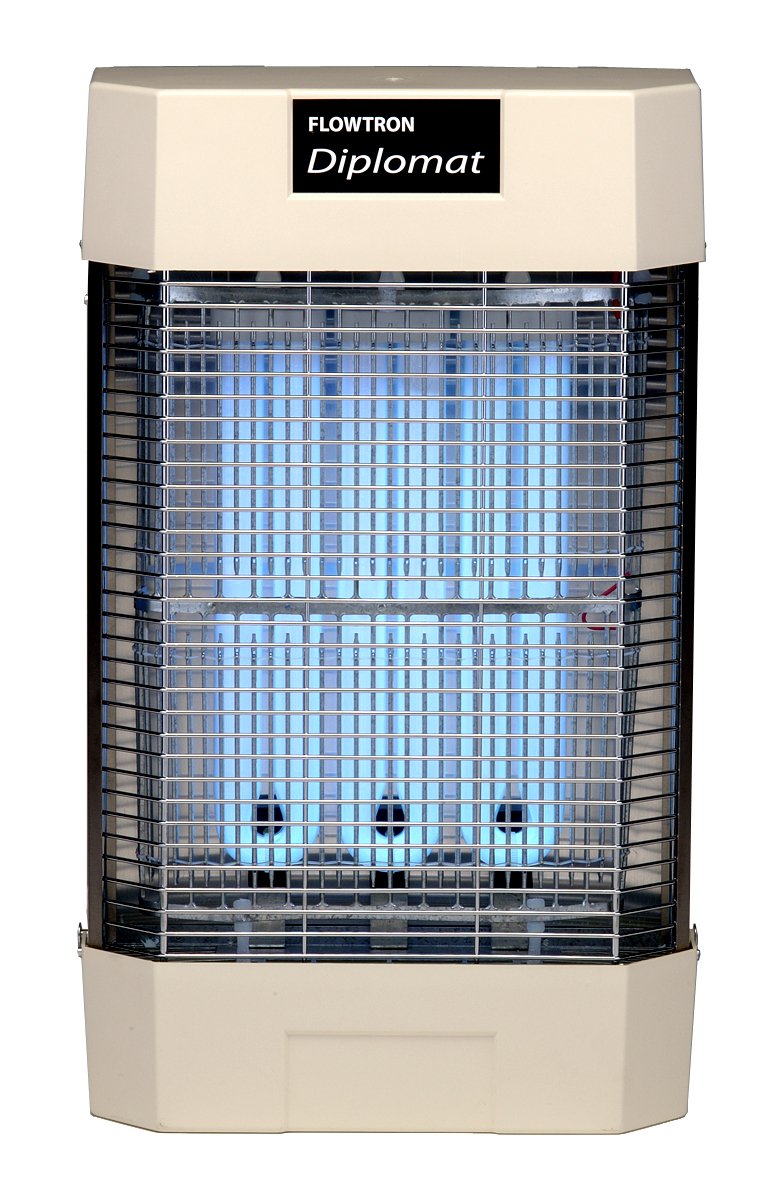 The Flowtron FC7800 is a larger version of the BK-80D, and works in the same way but with a more powerful UV light. This model uses three 40-watt, high-intensity, ultraviolet light bulbs (BF-130) that attract the insects towards their patented, non-clogging killing grid which electrifies the insects leaving a dry remain and dust that can be returned to the environment.

You can add an attractant for extra efficiency, but this is not necessary. This is a UL and CSA listed device and weighs 17 Lbs. 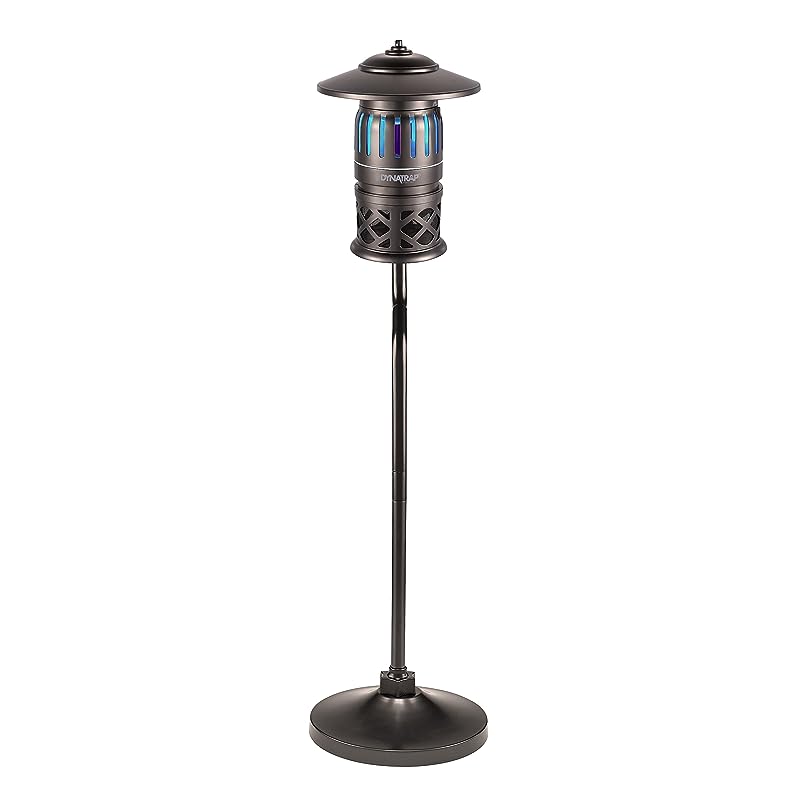 The Dynatrap model # DT1260-TUN is another great insect trap, this version is a smaller one and is designed to cover a -acre area. This model is also larger than the DT1050, but as with all Dynatrap models, operates in exactly the same way. The main difference is size, and this model uses one 15W UV fluorescent bulb that lasts for 3,000 hours, a proprietary CO2 producing Ti02 titanium dioxide-coated surface, and a quiet vacuum fan that sucks the insects into the devices trap.

This is a non-zapping system, and you do not need propane. This model comes with a 10 ft. cord for a 110V power connection and weighs 12.5 lbs. 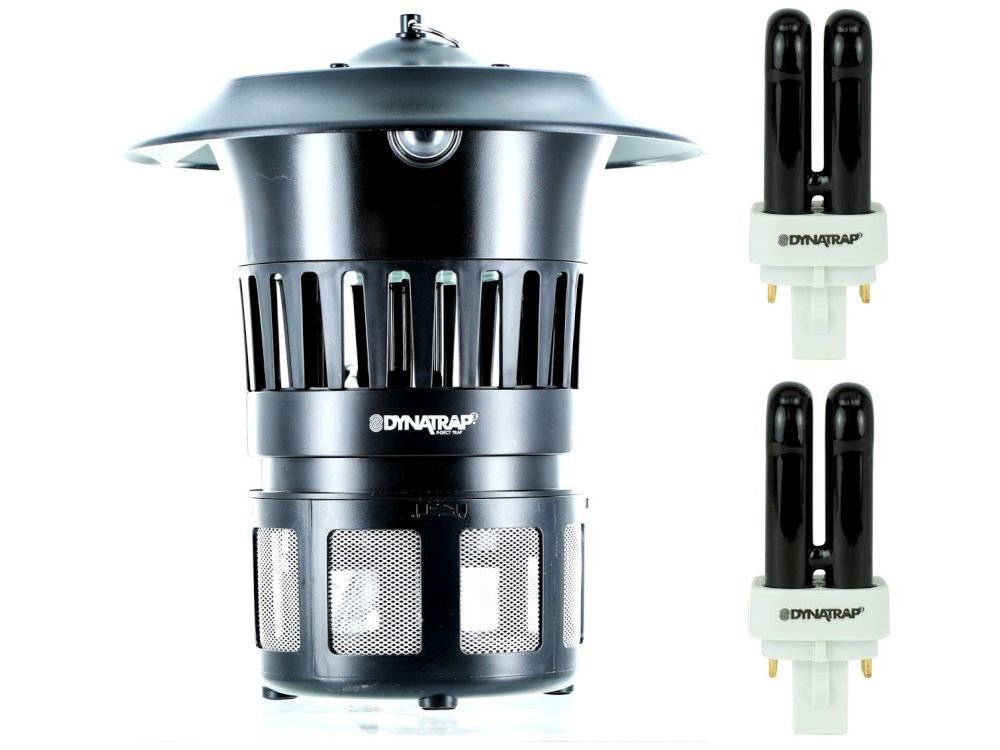 This is the small (compact) Dynatrap model DT1100. It is the smallest of their collection, and as with all devices from this company, works in the same way as the others.

The DT1100 uses one 15W UV fluorescent bulb that lasts for 3,000 hours, a proprietary CO2 producing Ti02 titanium dioxide-coated surface, and a quiet vacuum fan that sucks the insects into the devices trap.

Once again, this is a non-zapping system, and you do not need propane. This model comes with a 10 ft. cord for a 110V power connection and weighs a mere 2.88 Lbs. 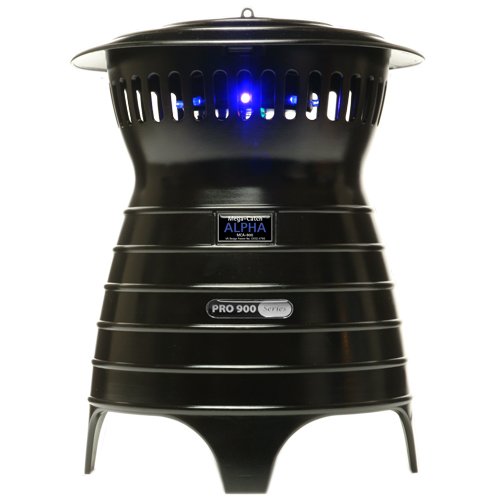 This device integrates an infrared energy source combined with UV LEDs. The heat is pulsed from a central core heating source using a digital pulse width modulation channel. The central UV LED cluster oscillates to mimic human heat that attracts the insects to the core.

This model uses both a mesh catch bag as well as a liquid catch container; you choose which one to adapt. 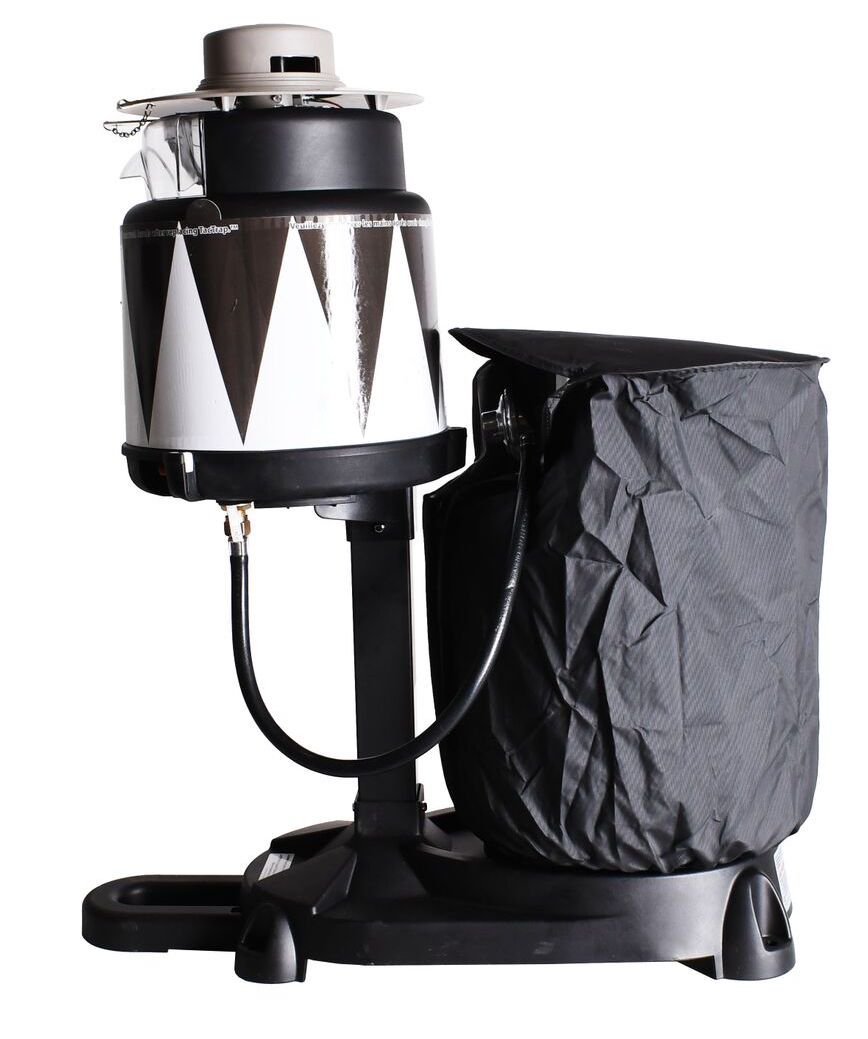 The Skeeter Vac SV3100 is a propane operated device that uses propane to create CO2 and attracts the insects towards the unit, where they are sucked into the trap by vacuum. The actual process is more complex; the device uses a catalytic converter that turns the propanol into CO2 which is then discharged together with Octenol, and moisture. This holy trinity of mixtures attracts the mosquitos, and they will be trapped in the device, some with be stuck the sticky strip, while others will fly around until they die of dehydration.

This device use Lurex3, which is a tiger mosquito attractant.

The WaveDrawer™ is a patent pending device that enables the trap to fill up without reducing the power of the vacuum. This device uses a unique 5-color LED “motion” lighting that improves the attraction rate.

Do the mosquito traps work?

Mosquito traps work by attracting mosquitos through a number of methods, trapping them and killing them. Female mosquitoes are the ones that bite, they use your blood to help grow their eggs, and they fly about 25 feet or less off the ground, using several sensing organs to locate human prey.

Female mosquitos use their antenna to detect CO2 and use compound eyes to detect movement, they also use a heat sensitive organ called the maxillary palpus. So, they detect using heat sensors, eye movement and “olfactory: style detection of gasses.

Mosquito traps are designed to attract mosquitos using these same sources of attraction, instead of directing them to a human, they drive them towards a trap.

These traps do work, and the more layers of attraction that a trap uses, the better they will work.

Which is the best mosquito killer? and What attracts mosquito traps?

The best mosquito killer is the one that catches the insect, and either zaps it, sticks it to a sticky strip or sucks it into a one-way net trap.

Most of the devices on the market use different methods, the best ones combine methods, while the cheaper versions use only one system.

The methods that are currently used in various combinations include:

UV Lighting arrays; these attract the insects, and the more complex the array, using various synchronized pulses, will attract even more powerfully.

Olfactory attractants; these are basically different kinds of smells and gasses that are released to attract the insects. Among these attractants is Octanol that when combined with CO2 become irresistible to mosquitos, since they mimic animal smells perfect.

CO2 systems, there are two modes, one is to burn propanol and releasing the CO2 in various grades of speed and spread. Another type is a catalytic conversion of propanol over the surface of a TiO2 (Titanium Dioxide) coated UV bulb as a photo-catalyst, which generates CO2.

Heat systems are apparent in all brands, since you need heat to generate UV light, burn propanol and also attract certain insects that seek out “animal” body heat sources.

Catch systems come is a variety of methods, these include the classic sticky paper method, another is a vacuum sucking the insect into a one-way net trap. There is a liquid cup holding method, these are cups that hold a scent-bearing attractant, and then there is the classic electrical wire that zaps the insect to death.

Final Word: Remember, you need to combine different methods to reach better results, this includes drying out all water sources where mosquitos grow, smearing on replants and using mosquito nets on windows. You might also want to perform an occasional anti-mosquito spray over the area around your home.

10 BEST COOLERS WITH WHEELS IN 2020 [REVIEW AND BUYING GUIDE]

10 BEST COOLERS WITH WHEELS IN 2020 [REVIEW AND BUYING GUIDE]

The 5 Best Croquet Sets in 2020 -Reviews and Buying Guide